The most basic goal of every living being on Earth is to reproduce and prolong life of its species through genes and evolution. What does it take to push a species so far from obtaining that goal that it ceases to exist entirely? For 860 known species of extinct animal, it seems that simply trying to live alongside the human race is the cause. 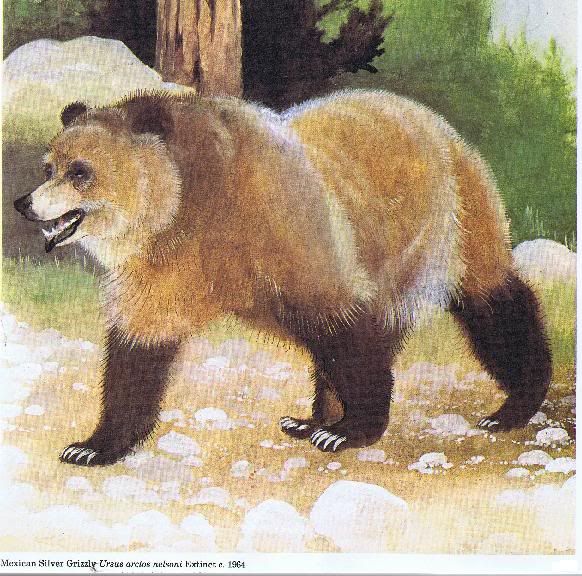 The Mexican Grizzly was also known as the  el oso plateado, or “silvery bear”, for the gray-white tint that appeared on its yellow pelt. The Mexican grizzly lived in Northern territories of Mexico, in the grasslands and pine forests. Because the Mexican Grizzly would sometimes kill the cattle of nearby farmers, they were trapped, shot, and poisoned in the 1930s. In 1960, numbers had been pushed to only 30 of these beautiful bears left in the mountainous region of Mexico. Despite being put under protection laws, careless and selfish acts of hunting prevailed and the Mexican Grizzly has been considered extinct since 1964. 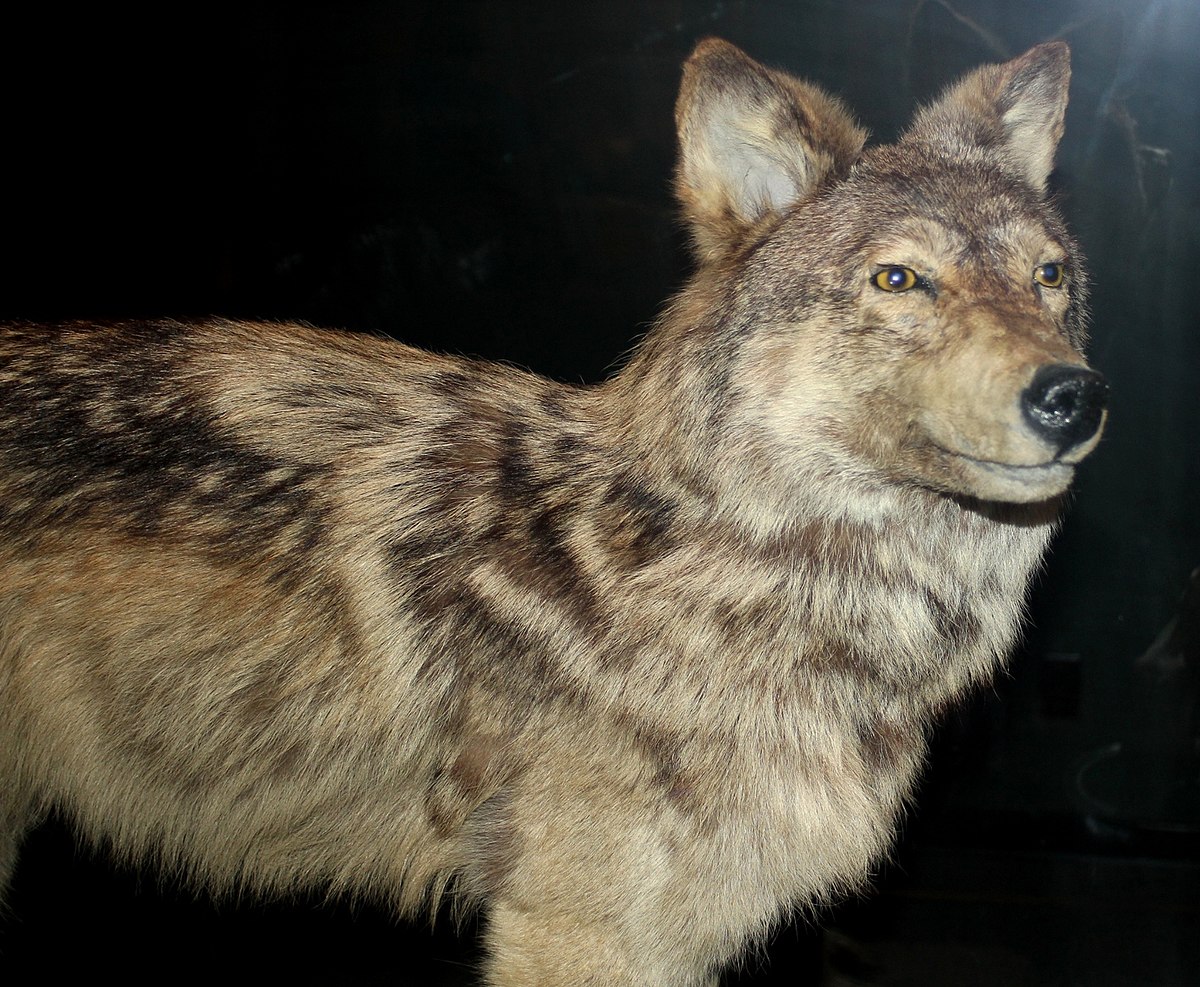 The Newfoundland Wolf is a subspecies of the grey wolf that was native to Newfoundland and Canada. European settlers came into contact with the wolf in the early 1800s. Feeling that their cattle was in danger and finding the wolves to be pests, a bounty was put on wolf hides on September 14th, 1839. The wolves are viciously hunted and murdered for sport, bounty, and “protection.” Then in the early 1900s, there is a drastic food shortage for the wolves as the number of caribou on the island decrease dramatically due to hunting and habitat loss, and the Newfoundland Wolf becomes an extinct species in 1911. Although this is a fairly recent extinction, there are no known photographs and very little research on the Newfoundland Wolf, obviously due to the lack of appreciation for this beautiful creature. The above is a stuffed version of what they believe the wolf looked like. 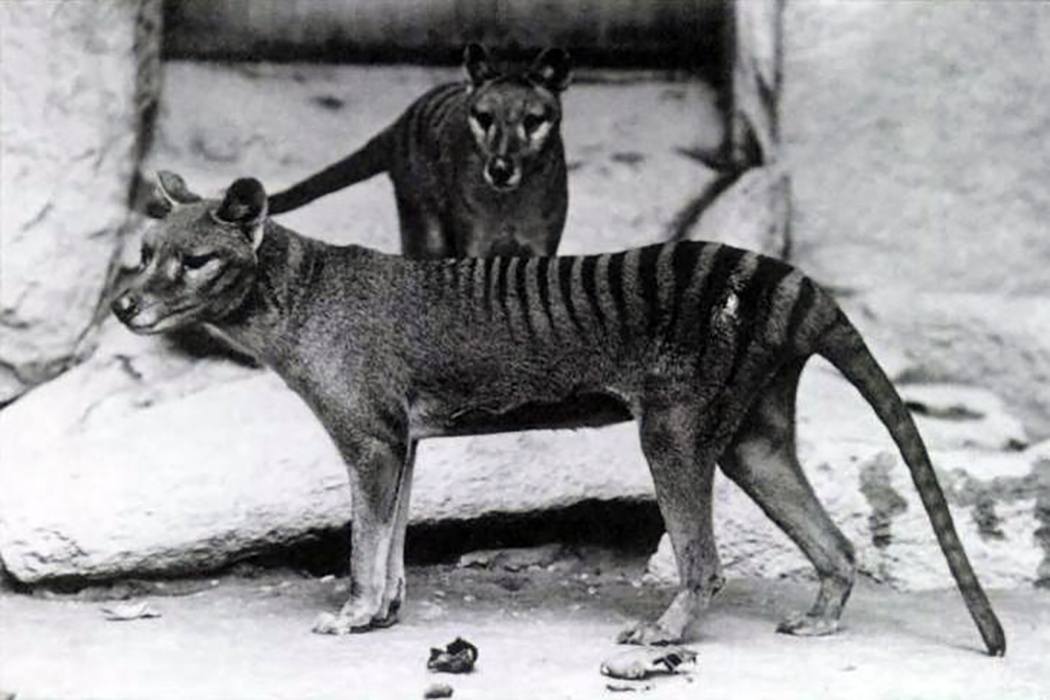 In my opinion, the Tasmanian Tiger, or thylacine, was one of the coolest and most unique animals to ever live. Native to Australia, Tasmania, and New Guinea, the Tasmanian Tiger was actually a carnivorous marsupial. They had a pouch similar to that of a kangaroo and their closest living relative is the Tasmanian Devil. The tiger was given it’s name due to it’s dog like size and the tiger stripes that ran down it’s spine. When the European settlers first arrived, sightings were rare. However, they were blamed for several attacks on sheep in the area and Van Diemen’s Land Company placed a bounty on the animal as early as 1930. Between 1888 and 1909, the Tasmanian government also paid out 2,184 bounties for dead thylacines, pups included. Disease and habitat loss pushed the tigers to complete extinction on the Australian mainland, and they were extremely rare in Tasmania through the 1920s. The last wild male Tasmanian Tiger is believed to have been shot by a distasteful and classless farmer by the name of Wilf Batty in 1930. The species was declared extinct in 1936.

The Japanese Sea Lion was found on the coasts of Japan and Korea. The sea lion was hunted frequently for valuable oil in it’s skin. It’s internal organs were used in oriental medicine and their whiskers and leather were harvested. At the turn of the 19th century, as many as 3,200 of these creatures died at our hands. By 1915, there were only 300 Japanese Sea Lions left. Commercial harvesting finally ended in 1940, but it was too late; 16,500 Japanese Sea Lions had been slaughtered and they became completely extinct by 1970.

One of the most recent and heartbreaking extinctions is that of the Western Black Rhino, once widespread in the savanna of Africa. The Western Black Rhino was genetically different from other rhino species. The last of these rhinos were thought to live mainly in Cameroon, but efforts since 2006 have failed to find any living individuals. The cause of their extinction is simple: poaching. These gorgeous creatures began walking this earth 7-8 million years ago, and in the 1900s their population reached 850,000! But for the mere sake of stealing its horn, we have wiped the Western Black Rhino from the face of the planet. In the 1980s, there were only a few hundred left, and by 2001, there were only five remaining in the wild. The majority of the population disappeared between 1970 and 1992. Despite efforts to revive these numbers, careless poaching continued to push them to complete extinction by 2011.

13,000 Species are Currently AT RISK of Meeting the Same Fate!

For these five gorgeous creatures, it is too late. But for 13,000 endangered species, we can still do something to save them. The Endangered Species List is regulated by the IUCN, or the International Union for the Conservation of Nature. The scale rates from critically endangered to least concern, and animals can move up and down the scale at any time. The most endangered species in the world currently is the Amur Leopard; other critically endangered animals include the Malayan Tiger, the Sumatran Elephant, and the Bornean Orangutan. Species such as the Red Panda, Hippopotamus, Whale Shark, and the Polar Bear sit in the middle of the scale.

Recently in 2016, the Giraffe was moved up the list from least concern to vulnerable. They also increased the threat level of 35 other plant and animal species. The number of giraffes decreased 40% in the last 30 years; there were an estimated 151,000 in the wild as of 1985, and in 2015 that decreased to 97,562 due to loss of habitat space, poaching, and disease. Wild giraffes have disappeared from seven of their native countries, including Malawi and Nigeria. Could you imagine your future grand children living on a planet devoid of such beautiful and familiar creatures?

Flight Ways and Why Extinction Matters

Thomas Van Dooren is a professor of Gender and Cultural Studies at the University of Sydney in Australia. He is also a leading researcher in Extinction Studies. He says we are living through the sixth mass extinction; we haven’t seen this kind of bio diversity loss since 65 million years ago, when the dinosaurs vanished. In his book Flight Ways, Van Dooren profiles five different birds on the edge of extinction while explaining why extinction matters to us. The goal of the book is to ignite curiosity in our relationship with the natural world but also inspire some accountability for life on the planet. In an interview with Time Magazine, he explained the concept of Human Exceptionalism; “a concept used by philosophers to describe an attitude where humans are set apart from the rest of the natural world. A little bit special, and so not like the other animal species.” He tells Time, “rather than thinking of ourselves as an animal, we have a long history, in the West at least, of thinking of ourselves as either the sole bearers of an immortal soul or a creature that is set apart by its rationality and its ability to manipulate and control the world. There are a whole lot of consequences that flow on from that kind of an orientation to the world. And some of them are very damaging for our species and for the wider environment. ” He believes that seeing our connection to the natural world and how the loss of a species affects us is critical to realizing the importance of protecting other creatures who aren’t so different from us, after all. In Flight Ways, Van Dooren talks about the Gyps Vulture of India, an example of how different communities are impacted by extinction. “The Parsi community in Mumbai have traditionally exposed their dead to vultures in “towers of silence,” as they’re called in English. Now the vultures are disappearing. Estimates suggest that 97 to 99 percent of the birds have gone in the last few decades. So the Parsi community is left in a very difficult position of trying to figure out how to appropriately and respectfully take care of their own dead in a world without vultures.” He says. “They’ve also played an important role in containing disease of various kinds and controlling the number of predators that feed on those carcasses and spread other diseases, like rats or dogs. The worry now is that the decline in vultures may lead to rises in the numbers of scavengers and in the incidence of diseases like rabies and anthrax in India.” Obviously, there is no shortage of cultural and ethical repercussions for humanity when we allow an extinction to occur.

Can We Save Them…and Ourselves?

It is absolutely possible for a species to recover even when on the very brink of disappearance; one success story is that of the Scimitar Oryx, also known as the Savanna Oryx. These creatures were once widespread across North Africa, as they’ve adapted to live in very hot and dry conditions. The number of Oryx decreased significantly due to extensive hunting for it’s beautiful horns. It’s believed that the myth of the unicorn actually came from the sighting of an injured Oryx with one horn. Climate change and loss of habitat has also played a huge part in the decline of it’s numbers. In 1985, there were only 500 of them left; and by 1988, a surge in poaching left only a few survivors. In order to save the Oryx from extinction, they were bred in captivity in Tunisia, Morocco, and Senegal. By 2015, there were 1,750 captive Oryx. In 2016, there was an attempt to reintroduce a small herd into the wild. The group was set free in Chad, and it produced the first Oryx calf born in the wild in over 20 years! There are currently 68 other species considered extinct in the wild, and this kind of conservation effort is critical to their survival as well.

We are just another mammal, thriving on this planet with massive power to manipulate what happens to it; why not use that power for good? Every animal is critical to the circle of life and the massive ecosystem we all share. Every time another species is declared extinct, it isn’t just a heartbreaking event; it changes the course of nature and sends out a ripple of effects that will be felt by future generations to come. For 860 one of a kind animals, simply living beside us has led to their demise; but we can be the solution for 13,000 currently endangered species. By fighting climate change and deforestation, we can stop animals from facing starvation and habitat loss. If we stand up against poaching, we can prevent the loss of the Giraffe, Sumatran Elephant, and other precious beings killed senselessly for their tusks and skins. Imagining a future without green forests and wild grasslands bursting with life is grim; but by being a voice for our fellow creatures today, we can end the senseless loss of biodiversity we are causing on Planet Earth.

Here’s One Way You Can Help Right Now!

The World Wildlife Fund offers a program where you can “adopt” an endangered animal! Simply pick an animal you’d like to adopt, (they even give you the option to search by threat level) and then make a contribution to the protection of that species anywhere between $25-250 dollars. Your donation will go to the World Wildlife’s effort to conserve that animal and it’s habitat! The WWF’s global conservation efforts are constantly making a difference for endangered animals, so please make a donation if you can. As a thank you, WWF will send you a cute little gift package including a “certificate of adoption”, a cuddly plush of the animal you’re helping, and more!

Find support for body and mind with Roots’ natural and high quality hand made products.